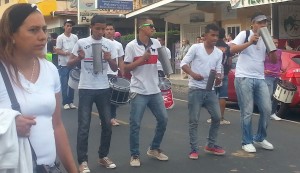 If you decide to move to Boquete Panama, learning Spanish is crucial. And respectful. It will make your life easier and your time here more fulfilling. How else will you meet your neighbours? Make friends? Understand Boquete news, politics, what’s going on in town? Take it from me: the half-baked approach to the Spanish language can only take you so far.

So why did I finally commit? I am embarrassed. Panamanian guests of Boquete Garden Inn (and guests from other Spanish-speaking countries) ask me how long I’ve lived here and I chirp proudly, “Almost six years!” Eyebrows raise and there’s an awkward silence. Because my Spanish is all mangled and in present tense and ugly (less so now after three weeks of classes). I blink and say ‘No entiendo’ way more than I should. (At least I don’t commit the ultimate expat cardinal sin: peppering sentences with occasional Spanish words (usually alcohol-related), as in “The cuenta, por favor! And don’t forget, Leo: I only had two Ron Abuelos! The rest were cervezas!”

I decided to take Spanish at Habla Ya Panama Spanish Schools. I was placed in Intermediate Level B1 conversational Spanish. My professor, Leidys Pitti, is patient, kind and excellent at her job: smiling sweetly at every um, ahh and Spanglified fake word I throw into conversation after I’ve exhausted my vocabulary. And when I stammer out something horribly inappropriate, she doesn’t blink an eye. She simply corrects me and we move on.

Dedicating four hours a day/five days a week to Spanish is the best decision I’ve made. It’s easy to say you’re going to practice Spanish in your free time, but unless you are extremely dedicated and disciplined, it just won’t happen. I planned to watch Destinos every night (funny, cheesy ’90s language program masquerading as a Telenovela). Same with clicking through Rosetta Stone, the Sesame St of adult language programs. Same with tackling the workbooks stacked up on my desk. Did I? Nope.

Going to class. Completing written assignments. Watching videos, listening to podcasts. Speaking not only to the teacher, but other students, solely in Spanish. It’s so important. And the key benefit to taking group classes? Fellow classmates and your teachers keep you accountable. You have to complete assignments on time and focus in class – or else you hold everyone back.

My Spanish is still ugly. And I still blink stupidly. But I’m working to change that. Next update? In English and Spanish.